Peter Trent, author of "The Merger Delusion.  How Swallowing Its Suburbs Made an Even Bigger Mess of Montreal" responds to Robert Libman's "Setting the record straight on the merger/demerger" 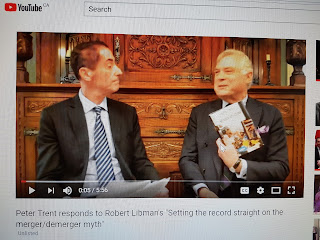 You asked me to comment on a recent flyer sent out by Robert Libman, a flyer that was entitled “Setting the record straight on the merger / demerger myth.” In this document, Mr Libman says:

2.     “The debate about demerging three years later was a complicated debate about municipal structures and taxation. I was not against true demerger, but opposed the Liberal government’s Bill 9 at the time...”

Mr Libman would have us believe that in 2001 he was against the forced mergers that created the Montreal megacity and that even as late as 2004 he was not against “true demerger” – only against the admittedly difficult and diluted demerger process permitted by the Liberals’ Bill 9.

Mr Libman’s own statements at the time run contrary to this rather creative recast of history.

It is true that Mr Libman was originally against the mergers. Mind you, by March 2001, he was helping the transition committee set up by the PQ government to impose them. But Mr Libman seems to have had an epiphany in November 2001 when Mayor Tremblay made him a member of the Montreal megacity’s Executive Committee. His public statements immediately took on a different slant. (Meanwhile, I was still leading the fight against the original forced merger legislation and preparing to go before the Supreme Court.)

Late in November 2001, the Toronto Star published a piece about Mr Libman entitled “What a difference a megacity job makes for outgoing mayor.” Libman told the Star that his new megacity job was “like a dream come true” and hoped the Supreme Court “will make suggestions on how to make this very important piece of legislation better... If we can maintain what we had before in the municipalities and if we can keep a lid on the taxes ... that can be a win-win situation for everyone.” A one-time nightmare had become a dream come true.

Robert Libman said to the Montreal Gazette (7 November 2001): “If there’s a chance to eliminate people’s fears, then the resolve to demerge will gradually die away.”

So Robert Libman was against forced mergers, yet called the law that imposed them a “very important piece of legislation.” And he was not against “true demerger,” yet years before he took a dislike to Bill 9, he was suggesting that the resolve for demerger would die away. One can only stand back in wonder at such agility in “straddling the fence,” as the Toronto Star put it.

On control of spending:

Robert Libman, in his recent flyer, now says suburbs on demerging would have controlled only half their budget. That’s not what he said repeatedly in April 2004 on CTV. He then said that the “breakaway municipalities” (as he termed us) would control only 30-40% of their budgets. How wrong he was. Today, the “breakaway municipality” of Cote St-Luc has control over nearly 60% of its budget.

On remaining a borough:

What Robert Libman will never say today is something that he repeated ad nauseam back in 2004: “boroughs have full autonomy and control over local services.” This is why he campaigned for CSL to remain in the megacity. Again, he was dead wrong. As many of us predicted, boroughs have constantly lost power over local services since demerger: snow removal, arterial roads, parking, human resources, labour negotiations, IT, communications, building management, large-scale zoning, purchasing...the list goes on. In fact, had CSL remained in the megacity, today it would control only around 20% of its spending, not 60%.

In this flyer, Mr Libman wrote: “As CSL taxpayers, we have gone from among the lower tax rates in Montreal to the 2nd highest of all 35 municipalities and boroughs on the island of Montreal.”

When Robert Libman became CSL mayor in 1998, there were four Cities (out of the 14 that eventually demerged) that had a higher tax rate than CSL’s. Three years later, just before CSL disappeared into the megacity with Libman still putatively its mayor, there were only two of these 14 Cities with a higher tax rate than CSL’s – the same two, incidentally, as today. This happened under his watch.

The only reason, as Mr Libman well knows, that Montreal boroughs have lower tax rates than CSL’s is – aside from poorer services – the massive subsidization of the Montreal residential sector by their commercial sector, a subsidy that grew even more once the megacity was created. This also explains why Dorval, TMR and Baie d’Urfé have lower tax rates than CSL – even lower than those in Montreal.

Is Mr Libman suggesting CSL remerge with Montreal to get lower tax rates?

The above commentary and quotes can generally be found in my 2012 book on the mergers; which, in common with this letter, is a matter of public information. 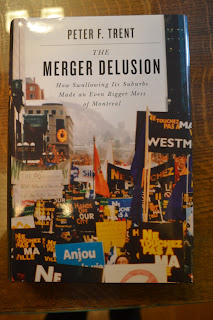 Posted by Mitchell Brownstein, Mayor of Cote Saint Luc at 01:00 No comments: