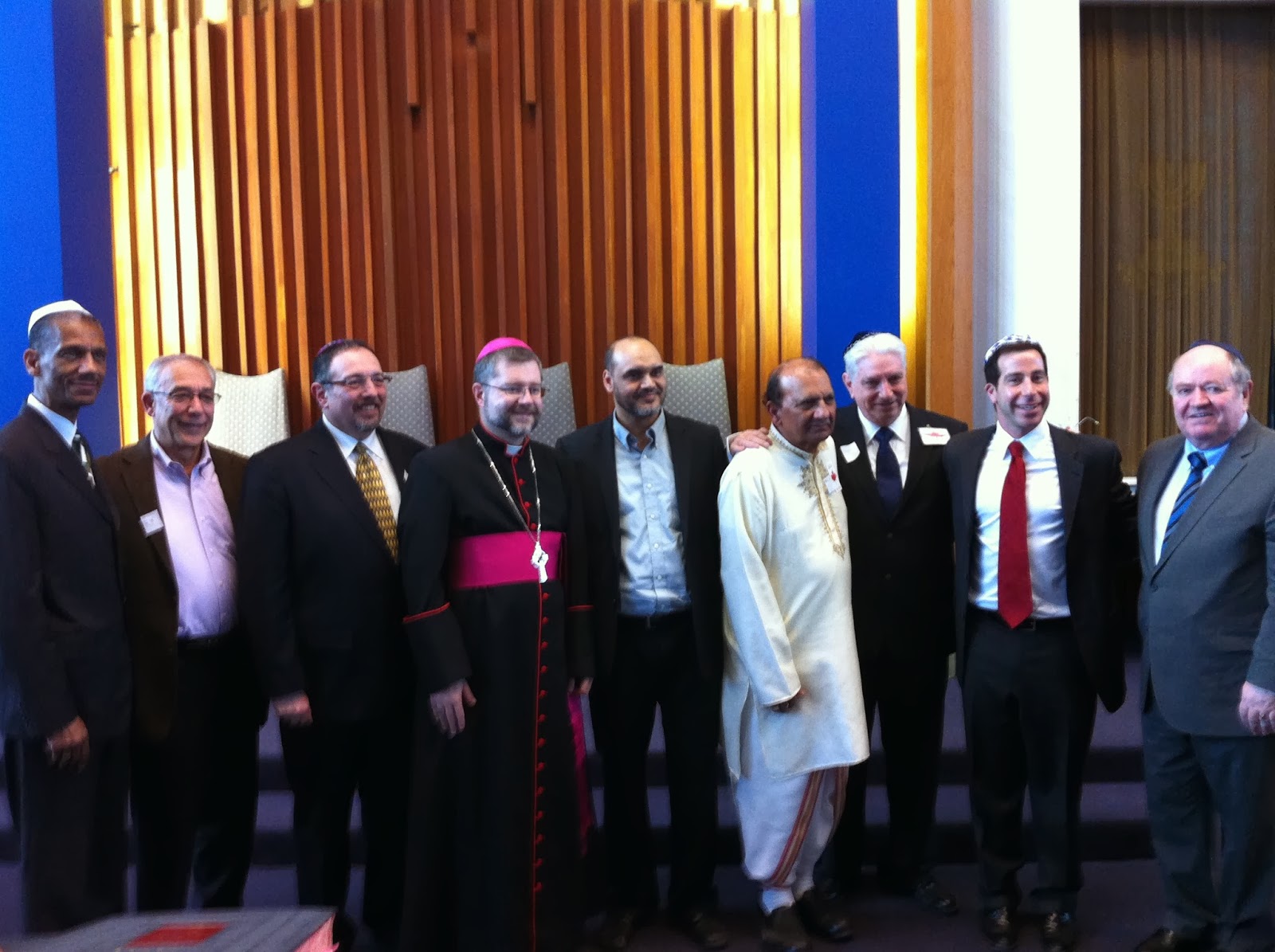 On Sunday, March 9th I had the pleasure of attending an interfaith event opposing Bill 60, Quebec's Charter of Values.

Anthony Housefather wearing a kippah adorned with fleur de lys symbols, spoke of the inherent dangers of Bill 60, stating that the law would place the French language above freedom of expression, that the Quebec Charter of Human Rights and Freedoms would be amended to place secularism above freedom of religion and that municipalities, and boards will have to pass a resolution within one year that they accept the values of Bill 60.  He emphatically stated that Cote Saint Luc will never pass such a resolution and that we would challenge the law vigorously before the courts.

Rabbi Lisa Grushcow, of the Temple Emanuel stated that everyone, whether religious or not has had moments in their lives where they have felt a connection to and received comfort from religion and that we must never allow the State to interfere with this most important freedom.

Bishop Thomas Dowd, auxiliary Bishop of the Archdiocese of Montreal, stated that this law provides a license for people to show intolerance and hate.

Iman Zijad Delic, Iman of South Nepean Muslim Community, came from Bosnia and then lived in Croatia, immigrated to Canada in 1995 after studying the benefits of immigration to the United States, Canada and Australia and chose Canada as the most open of countries.  He expressed how this law is the opposite of openness in so many ways and must be stopped.

Hindu Priest Pamnaraine P. Tiwari Balbahadur, of the Hindu Devotional Society, stated that not only is Bill 60 unconstitutional but it is wrong and sinful.  He further pointed out that the Federal soccer association recently ruled that turbans, kippahs and hijabs are allowed to be worn when playing socer and that if we can play together we can live together.

Darryl Grey stated that this law is reminiscent of the struggle for equality in the Black community. We are living in serious and dangerous times when we speak of justice and need security outside the place of worship where we congregate. He continued by stating that if government can tell us what to wear and how to wear it then we live in very serious times. He went on to say that just because a law is legal doesn't make it right and made reference to Hitler's laws and the segregation laws. He closed by saying that our leaders will not let us go. They will not let us leave Quebec as they will speak up on our behalf and insure that we all go to the polls to vote on April 7th

Rabbi Bright, of the Shaare Zedek congregation, stated that if you walk for just a few minutes in any major cosmopolitan city, you meet more people of different backgrounds than an 18th century anthropologist would meet in a lifetime.  He went on to point out that is the beauty of today's society. He closed by saying that we who had gathered there this day, must be a group a people who assembled for a certain purpose in order to create a team of builders to teach those who fear the stranger to love the stranger.

Sent from my BlackBerry® smartphone
Posted by Mitchell Brownstein, Mayor of Cote Saint Luc at 19:01